Since antiquity, the Lion of the Leo constellation has always been correlated with the Sun and the power conferred on leaders. The constellations are the most ancient astrological heritage of humankind. Long before there were signs and horoscopes, dedicated priest-astrologers of virtually every ancient civilization observed sky-patterns and began relating their observations to the experiences of man.

Leo, the 12th largest constellation, has many bright stars and with just a little imagination, it is probably the easiest to identify in the night sky. Leo is one of the few constellations that looks a little like its namesake, the majestic lion.

It's Easiest to See the Leo Zodiac Constellation in Spring

Leo is easy to locate, but it's easier to see in March, April, or May. During these months, it will be visible as soon as darkness falls and stays out until the early hours of the morning. Just look for the upside down Big Dipper in the north, then identify the two outer stars in the Big Dipper's bowl. Now, in your mind's eye, draw an imaginary line between these two stars. In one direction the line points to Polaris, the North Star, in the other direction it points to Leo.

How to Spot Leo From the Southern Hemisphere

No matter where you live, Leo will be easier to find if you have a star map set for your location:

The Leo Constellation and the Astrological Leo

The constellations are patterns of fixed stars, which when viewed from Earth, are used to make sense of the night sky.

The Precession of the Equinoxes

The astrological signs were named after 12 of 13 constellations that touch the Earth ecliptic. However, due to the precession of the equinoxes, the signs of the tropical zodiac have gradually shifted backward for over two thousand years. The slow backward motion has distanced them from the from the ancient sky figures that gave them their original names and identities. Each sign in the tropical zodiac now largely overlays the star constellation that once preceded it.

It's interesting to note that at present, during the time the Earth's sun is passing through the tropical zodiac sign of Virgo, it's also seen moving against the backdrop of the Leo constellation.

Leo's fixed stars all seem to echo the theme of the Leo constellation and reveal how difficult it can be to rise to fame and power, the difficulties individuals have with the right use that fame and power, and how quickly those in power and everything they've built can come tumbling down. 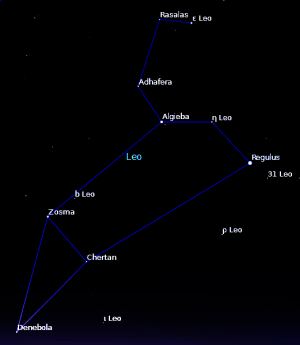 Leo's star Regulus, the "Heart of the Lion" and the "Crushing Foot," is the most kingly of all the fixed stars. Regulus is a first magnitude star and the 20th brightest star in the sky. It's estimated to be about five times bigger and 160 times more luminous the Earth's Sun. It is only a degree from the ecliptic. Therefore it's a relatively common sight to see the Moon passing close to Regulus.

One of Four Royal Stars

Regulus is one of the four royal stars of the heavens; these stars are considered to be sentinels watching over other stars. They form a fixed cross in the night sky. In esoteric astrology, the fixed cross is closely associated with love and wisdom.

Regulus means King, and this star is taken as a symbol for glory and power. It is an indication of high status and leadership. If well placed in a horoscope, it is generally regarded as beneficial, promising success and good fortune.

When Regulus Is Prominent in the Horoscope

Those with Regulus prominent in the horoscope often obtain positions of power and have leadership ability. However, there's also the possibility of disgrace and a disastrous fall from a prominent position. Note: Both Bernie Madoff and Donald Trump have Regulus conjunct their ascendants.

Other Stars of Interest in Leo

Denebola, the tail of the lion, can show honors and wealth, impulsiveness, disgrace, regrets, misfortunes, and a rise to fame or fall from grace, depending on the position and aspect to other placements in a horoscope.

Zosma, the lion's hip, is prominent in the charts of people who openly show their eccentricities and disdain for established systems of religion and taboos. Their work or personality may shock the world. Note: The legendary Madonna, has the ascendant and the moon conjunct Zosma. From her eccentric performances, which often include religious motives to her open practice of Kabbalah, she reveals the influence of Zosma in her natal chart.

Algenubi the southern star of the lion's head, and Alshemali the northern star of the lion's head are said to indicate someone with an appreciation of language, a bold and daring nature, but who tends to look carefully at a situation before forging ahead. Depending on its position and other aspects to placements in a horoscope, these can also confer an individual with arrogance and a cruel, heartless nature. Note: Hillary Clinton has Saturn conjunct Algenubi in her natal chart.

The night of November 12th-13th, 1833, marks the discovery of the Leonid meteor shower and also the birth of meteor astronomy. This was the night that many Native American tribes refer to as "the night the stars fell."

The Leonids is an annual meteor shower that emanates from the Leo constellation. The show generally begins on November 13th and ends on November 21st. The maximum often occurs on the night of November 17th/18th. The shower is barely visible at the beginning and end, but at its Maximum it displays about ten meteors an hour.

Every 33 years or so, the Leonids enter a phase of enhanced activity that accompanies the return of its parent comet, Temple Tuttle. The last enhanced period occurred during 1998-2002.

Astrologers speculate the meteors that radiate from a constellation express the characteristics of the constellation from which they radiate, and as they fall to Earth, they deposit something new that must be assimilated on planet Earth.

The Leo constellation, as stated above, symbolically represents the rise to fame and power, the difficulties with the right use of that fame and power, and how quickly the famous and powerful can come tumbling down.

The Stories of Leo 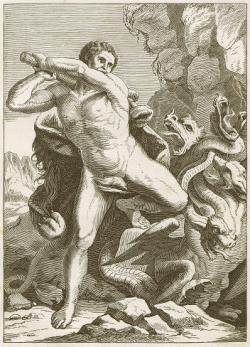 In Medieval times, Christians regarded Leo as a symbol of the Lion's Den in the Book of Daniel. To the Hebrews, the Lion was the traditional tribal sign of Judah (Genesis chapter 49). Ancient Egypt's Sphinx is a creature with the body of a lion and the head of a man; it's a representation of the joining of a lion's strength and dominance to a king's intelligence. There is a representation of the Egyptian zodiac at the Temple of Dendera, that shows a Lion standing on an outstretched Serpent that represents Hydra, the largest constellation in the sky.

The myth most often correlated with Leo is the first of the "Twelve Labors of Hercules." Hercules first labor was to kill the Nemean lion (spawned by Typhon) that was terrorizing Corinth. The lion's hide was impenetrable. Neither spear nor knife could pierce the lion's tough hide. Hercules finally traps the lion in a cave, knocks him on the head and chokes him to death with his bare hands. Hercules then had to skin the lion with its own claws.

In the telling of the myth, it's said that Zeus, Hercules's father lifted the lion up into the heavens and placed it among the stars as a way to honor his son's first triumph.

This myth symbolizes the masculine strength of will, courage, creativity and the tenacity that is inherent in the astrological sign of Leo

Leo is the masculine fixed fire sign of the zodiac. In esoteric astrology, Leo is where you begin the development of ego by walking the path of self-realization. Leo's deeper soul purpose is to extend love into humanity willingly through the realization and love of self as an individual. Leo expresses this through the qualities of open-heartedness, warmth, creativity, and leadership.