Commonly called Capricorn (the Sea-Goat), Capricornus is a constellation of fixed stars that seem to form the image of the sea-goat, a mythical creature that is half goat and half fish. Although the group of stars named Capricornus and the astrological sign of Capricorn are not the same, ancient astrologers/astronomers believed the legends and myths related to Capricornus told stories, and they used those stories to define the nature of Capricorn, the tenth sign of the astrological Zodiac.

Capricornus, which means "goat horn" in Latin, is a faint group of fixed stars located in the Southern Hemisphere.

When It's Easiest to See the Capricorn Constellation

Capricornus is best seen during the early evening in September and October. It stays close to the southern horizon as seen from mid-northern latitude but is highest in the sky in early September. From the Southern Hemisphere, it will appear upside down and will either be overhead or high in the northern sky.

To observe Capricornus, find a dark site, preferably on a moonless night. Make sure you have a star map of your location and binoculars, even an inexpensive pair will help. However, as you can see in the video above, don't expect to quickly, if ever, see the outline of a goat-fish in Capricornus.

For best viewing, obtain a star map of your location:

About Capricornus and Capricorn

Precession of the Equinox

In the ancient past, the astrological signs lined up with the constellations but due to the precession of the equinoxes, that's no longer true. The Earth's sun passes in front of the Capricornus constellation from about January 20 to February 17. However, the sun's journey through western astrology's sign of Capricorn happens from about December 21 to January 20. When the sun is in moving through the sign of Aquarius, the Capricornus constellation is in the background.

Astrologers believe when Capricornus's fixed stars are featured prominently in a horoscope, they add important information to their interpretations. 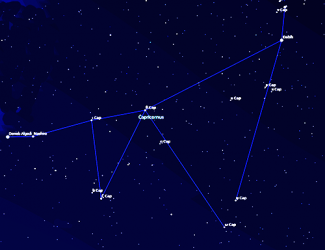 The brightest star in Capricornus is Dabih, the "Head of the Goat." It's a yellow-hued star that is 39 light-years from Earth. Its name comes from the Arabic al-ahabih, which means "the butcher." Astrologers believe when Dabih is strong in a horoscope, the person will likely have many crises in their life, but they have also been gifted the patience, trust, and faith to deal with those crises, as well as the decisiveness to take action when needed.

Other Notable Named Stars in the Capricorn Constellation

Other notable stars in Capricornus:

As with everything in astrology, how easily the gifts indicated by the fixed stars can be accessed depends on where they are placed in relation to the entire horoscope.

The Symbolism of the Sea Goat

Taken together, the sea goat symbolizes the evolved individual who has mastered:

There are many ancient legends and myths associated with the Capricornus constellation. Below are a few of these popular myths. 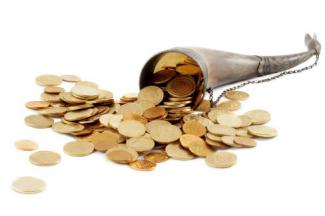 The goddess Rhea fled with her son Zeus when he was a baby because she feared he would be murdered by his father, Kronos. She hid on Mount Ida and asked the goat Amalthea to watch over, suckle, and care for Zeus. One day while partaking of his daily meal, Zeus accidentally broke off one of Amalthea's horns. Zeus bestowed a blessing upon the horn that he had broken off. The horn would forever provide all that was needed by Amalthea. Eventually, Zeus grew up, won the War of the Titans, overthrew his father Kronos, and took his place as the ruler of the gods.

The Capricornus constellation is said to be a gift from Zeus to his caretaker Amalthea. It's Amalthea's horn, known as the Cornucopia or Horn of Plenty, that associates Capricornus with the astrological sign of Capricorn. Amalthea's "Cornucopia" is a symbol of prosperity and growth, which is so much a part of Capricorn's nature.

The Greek god Pan was a satyr and like all satyrs, Pan, the son of Hermes, was half man and half goat. He was a woodland god, worshipped by the ancient Greeks and a favorite of the Olympian gods despite his repulsive appearance. Pan, who adored women was the ancient Greek god of fertility, shepherds, and music. Pan represents Capricorn's earthy and sensual nature.

Pricus, an immortal sea goat who could manipulate time, was favored by the Greek gods. Pricus had many children and lived near the seashore. In Pricus's Greek myth, his children began pulling themselves up onto the land with their two front hooves. However, the more time they spent on land, the more they became like physical goats.

Pricus repeatedly turned back time in an attempt to stop his children from leaving but eventually realized he couldn't control their fate. At the loss of his children, Pricus longed for death, so Chronos honored his wish, but also made him immortal as the Capricornus constellation.

The myth of Pricus is connected to the sign of Capricorn because he was, along with Chronos, a god of time and also because of his steadfast determination to succeed and his misery in failure.

Capricorn is a feminine, cardinal, Earth sign. As a feminine sign, Capricorn is moist, receptive, less active, and focused on the sensual. As an Earth sign, it's practical and exacting. As a cardinal sign, it initiates action.

Capricorn is a feminine (Yin) sign ruled by a masculine planet (Yang), Saturn.

Capricorn represents the marriage of Yin and Yang, the inner and the outer world, and the human capacity to attain heights of mastery, both in the material and spiritual world. 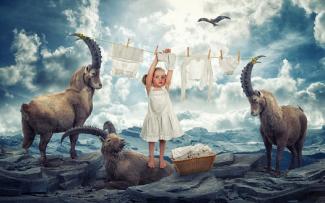 It's often said by astrologers that "Capricorn individuals suffer in youth and profit in maturity and old age." You could say they experience the worst and the best of life. However, it's only in hindsight that you can fully appreciate Capricorn's resilience and achievement.

Capricorn is possibly one of the most mysterious and paradoxical signs in the astrological zodiac. It's associated with business, finance, ambition, the political sphere, authority, and worldly recognition, yet on a spiritual level it's associated with the disciple-initiate. The sign of Capricorn represents both the best and the worst of humanity.

Ancient cultures believed the Capricornus constellation was "Heaven's Gate." Each year when the sun enters Capricorn, the season of light begins, Heaven's Gate opens, and the darkness begins to recede. During this time of the year, most cultures engage in celebration and give thanks to the birth of the sun (son). The sign of Capricorn, which has the reputation of being cold, dark, and hard, is actually the "Bringer of Light."