The constellation named Aquarius, the Water Bearer, is a group of fixed Stars seen as a man in kneeling position, his urn of cosmic water resting on one shoulder with its contents spilling out in front of and underneath him. Astrologers believe the mythology of the constellation with the same name is an important part of an astrological sign's nature, and the fixed stars add important depth to their interpretation of horoscopes.

Aquarius was first recorded in the second century by the Greek astronomer/astrologer Ptolemy. It is an ecliptic shaped constellation that lies between the constellations Capricornus and Pisces. The constellation spans 30 degrees of longitude in the zodiac signs Aquarius and Pisces and contains 16 named fixed stars. Traditional astrology considers the Aquarius constellation a place of good fortune.

It is most easily recognizable by its plow shape and by its four stars; three corner stars and one in the center of the urn, which the water bearer is holding. It's located in a deep, dark area of the sky that's sometimes called the celestial sea. In this dark part of the night sky, you'll also find Cetus the Whale, Pisces the Fish, Delphinus the Dolphin, Eridanus the River, and Piscis Austrinus, the Southern Fish.

Although Aquarius contains many double and triple stars, as well as the Helical Nebula, it has no particularly bright stars and can be difficult to view with the naked eye. However, if the sky is very dark, you might be able to see a noticeable pattern of stars within Aquarius. This little zigzag pattern of 30 faint fixed stars is called the water jar. They flow down toward the star Fomalhaut. Fomalhaut is in the constellation Piscis Austrinus, the Southern Fish. The Southern Fish is the fish that drinks from Aquarius's jar.

Of course, a star map based on your location will make it much easier to locate Aquarius, and there's a website and an app for that.

The Brightest Star Is Sadalsuud

Sadalsuud is the brightest star in Aquarius. It is sometimes referred to as Lucida Fortunae Fortunarum, which is Latin for the "brightest luck of lucks." The fixed star Sadalsuud is associated with the spring and the good fortune brought by the sun when it rises after winter has passed. Its mass is six times that of our Earth's sun, and it is 2,200 times more luminous. 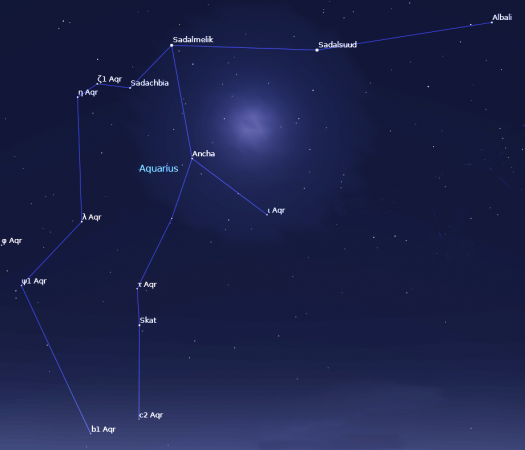 Astrologers recognize Sadalsuud as a sign of good fortune for all who have it prominent in their horoscopes. However, like all such gifts, the "good fortune" bestowed by Sadalsuud should not be abused. When it is, Sadalsuud can portend trouble and disgrace.

Meaning of Sadalsuud in a Horoscope

When it is prominent in a horoscope it portends:

Fixed star Sadalmelik is the "luck of the king." When it is prominent in a horoscope it portends:

Fixed star Sadachbia is "the lucky star of hidden things." When it is prominent in a horoscope it portends:

Fixed star Skat is "the wish." When it is prominent in a horoscope it portends:

Astrologers speculate the meteors that radiate from a constellation express the characteristics of the constellation from which they radiate and as they fall to earth, they deposit something new or unexperienced on this planet.

The Water Symbolism of Aquarius

What is Aquarius's connection with water? 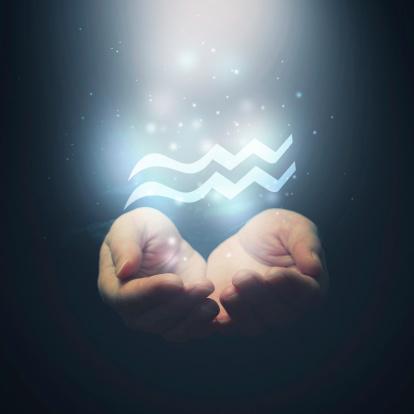 Aquarius is derived from the Latin aqua - water.

The Greek Myths of Aquarius

The Greek myth of Deucalion and his wife is very similar to the Judeo-Christian legend of Noah's Ark. Humanity had grown cruel, vicious, and savage, and Zeus, despairing for humankind, sent a great flood upon the earth. The only two people who survived were Deucalion and his wife Pyrrha, who Zeus considered the last godly people on earth. After the flood, Zeus helped Deucalion and Pyrrha create a new and wiser race of men. Deucalion is known as the Water Bearer because he brought life to a new generation. 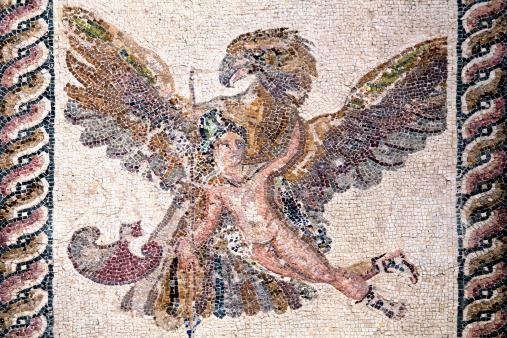 In one version of another Aquarian myth, Zeus, in the form of an eagle brought Ganymede, who he thought too beautiful to remain a mortal, into the heavens and presented him to the gods to be their cupbearer. In a later version, Ganymede's kidnapper had a homosexual passion for him. There are many different tellings of this myth; however, in each Ganymede is a beautiful and kind young man.

Aquarius is a human sign; it represents the common man and woman. It merges the intellect with the intuition and connects everything and everyone. It's the Water Bearer's understanding of oneness that allows Aquarians to use their intellect, intuition, and communicative abilities to pour out this message of oneness to mankind.

The Constellational, Tropical, and Sidereal Zodiacs