About the Blue Dragon in Chinese Astrology

There are 12 animal zodiac signs in Chinese Astrology. The Blue Dragon is a prominent one and also a mythological guardian.

One of the Four Mythological Guardians

There are four mythological creatures that represent the four symbols (four regions) found within the Chinese constellations. The Chinese system actually groups the constellations a little differently than Western astrologers since the two astrology systems developed independently of each other. Each animal that appear in Chinese astrology is assigned to one of the four cardinal directions. These are the compass directions of north, south, east and west.

There is also a fifth mythological animal mentioned in some Asian cultures, the Yellow Dragon and often referred to as the Yellow Snake. This dragon is considered the guardian of the center. This is the center circle of a compass. In feng shui, this translates to the center of the bagua that is transferred to your home or business blueprint layout. 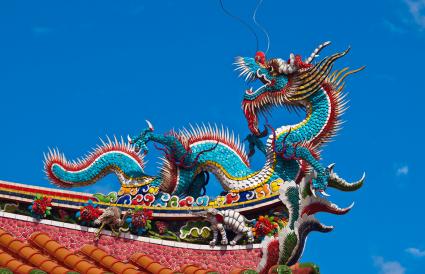 The Blue Dragon holds dominion over Chinese astrology since it is the controlling factor of the stars in the Eastern constellation. The Blue Dragon determines how these stars move across the heavens. This control is easily revealed in modern Western signs Scorpio. Virgo, Libra, and Sagittarius.

Unlike western astrology that bases its theories predominantly on sun movements, Chinese astrological theories rely heavily on the moon through a sidereal month (length of time required for moon to return to the same position in heavens). The moon's movements are divided into what are known as the 28 mansions. Each of the four directions are assigned seven mansions. The Blue Dragon in Chinese astrology, aka Azure Dragon, is associated with the following seven mansions:

Of all the signs found in Chinese astrology, the Blue Dragon has a larger-than-life persona. If you're looking for a Western zodiac sign comparable to the Blue Dragon, that would be the three fire signs of Aries, Leo, and Sagittarius.

Even though the Western fire element represents Aries, Leo, and Sagittarius, the fire element shouldn't be confused with the Blue Dragon's element. The Azure Dragon is traditionally first associated with the ruling element of the compass direction, East. This is the wood element. Since the color of this element is green, the dragon is often called the Green Dragon. However, blue is the color associated with the water element and why the Azure Dragon is often referred to as the Water Dragon.

The ruling planet Jupiter plays a decisive role in Chinese astrology. The Blue Dragon was assigned to represent the planet Jupiter. In fact, the Chinese created their astrological 12-year animal cycle based on Jupiter's orbit that takes 11.86 years. They chose to round this figure to 12 and then divided it into 12 animal zodiac signs, one for each year.

Characteristics and Traits of Blue Dragon 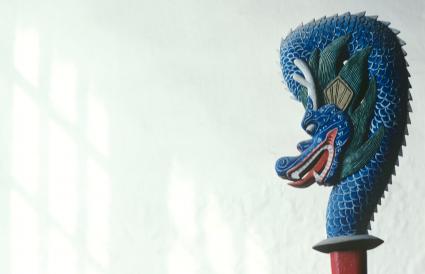