When an Aries man is in love, he becomes single-minded. This cardinal fire sign does not hesitate to make the first move, and he's not afraid to take risks or to appear foolish. Headstrong and impetuous, he learns the hard way - by making mistakes, a lot of them.

Aries loves to flirt and enjoys every nuance of that first attraction. If a woman catches his interest, he will all but stand on his head to get her attention. Like a schoolboy, his approach can be annoying and even overwhelming. When he's rejected, as he often is (because his approach is not for everyone), he bounces back and is happy to keep trying. His heart is easily (if temporarily) broken, but nothing can keep this man down.

Signs an Aries Man Likes You

An Aries man won't play hard to get or shy away from pursuing you. He loves a challenge, and if he sees others are also vying for your attention, he'll try even harder to win your heart.

If an Aries man is crushing on you he'll:

If an Aries man is showing you his romantic side this is a sure sign that he's fallen hard for you.

Once he's smitten, Aries focuses all his attention on the object of his desire. Cardinal fire is intense! Like a match igniting, his heart is instantly aflame, and he won't be swayed. When an Aries becomes infatuated, it is only too obvious to his friends, for he single-mindedly speaks of little else. This might be a bit of a joke to those who know him well. When he encounters her, his behavior may be cartoonishly awkward, his feelings overly apparent. He can't hide his heart; it hangs nakedly on his sleeve! Some women find this sort of attention unwelcome, but many are charmed by his directness, sincerity, and passion.

Quick to Fall, Quick to Move On

Aries plays by his own rules. He doesn't care how convention says he should behave, and that definitely includes his love life. He will direct his energies with full intensity toward whatever he is most interested in at the moment. What he wants, he pursues, but for all his ardor, he can give up and move on with surprising swiftness if he doesn't get the response he wants within a certain span of time. Depending on what else is going on in his chart (Moon sign, ascendant sign, other planets, astrological aspects, and houses), he may give up quickly or persevere for a while, but patience and persistence are not his strong points.

The Aries Male Is Impulsive and Passionate

The level of Aries' impulsiveness is determined by how mature he is and the kind of self-exploration he's done. An immature Aries can be head over heels in love every other day with someone new. If he's learned how to develop relationships and understands the rewards of nurturing a serious love relationship, his impulsive nature manifests as spontaneity and openness to new experience. 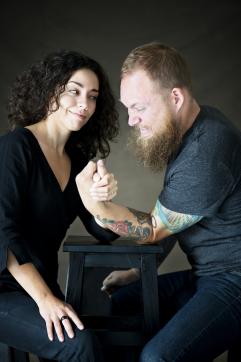 Aries is a fire sign, and this man has enough passion for several men. This can be a problem for the less mature Aries, who has not learned about boundaries and may not be willing to hear a 'no'. An immature Aries can be infantile about sexuality; he wants what he wants now and can't comprehend why his partner's needs should matter to him. If he is in love with a strong woman who can stand up for herself, he can learn the hard way 'no means no.' A partner who can hold her own will command his respect; the danger is he will take advantage of someone with weak self-esteem and poor boundaries. He does not mean harm and does not even recognize he is taking advantage; like a child, he simply takes what he can get until he reaches a limit he can't go past.

Aries wants a playmate more than a soulmate; someone who can meet and match his energy and enthusiasm, and who won't hesitate to yell at him to stop when he gets carried away. Excitement is one of his mainstays in life. If an Aries commits to marriage, it will take something drastic to make him stray. His Libra Earth opposite sign makes sure of that! However, he is self-centered and if he feels his needs are not being met (particularly sexual needs), he may see nothing wrong with moving on.

Aries can be jealous, and though he will try his best not to show it, he is not good at hiding his feelings. At root, he is terribly insecure and needs a lot of attention and positive reinforcement. Deeply competitive, he is an alpha male (or sometimes an alpha wannabe) who can't stand the thought another man might get the love, sex, and attention that belongs to him. Yes, he is possessive, but he doesn't want to be possessed himself. He has a double standard about a lot of things because his emotions are fixed on 'me'. In order to grow, he will have to embrace his Libra Earth qualities, learning his partner's needs matter as much as his own and that fairness and balance are important to his own long-term happiness.

Aries in a Nutshell

No one can turn on the charm better than an Aries man who is in love! His childlike directness combined with the innate grace of his Libra side can melt the heart of any woman he chooses as long as he is her type. An acquired taste, he has a lot to learn and far to go, but despite his blunders, he is quick to learn from his mistakes. He is an innocent at heart, and as loveable as a child.