The Aries constellation is known as the "Ram" in the sky. In ancient times the Sun appeared against the backdrop of the stars of Constellation Aries at the vernal equinox. The Sun's appearance on the Earth's ecliptic was cause for celebration because spring had arrived in the northern hemisphere.

The Myth of the Ram in the Sky

The meaning of Aries in Latin is "ram." The ancients frequently sacrificed rams to their gods. Mythographers agree that Aries is the Ram whose Golden Fleece was the object of the voyage of Jason and the Argonauts. This ram made its appearance on Earth just as King Athamas of Boeotia was about to sacrifice his son Phrixus to ward off an impending famine. 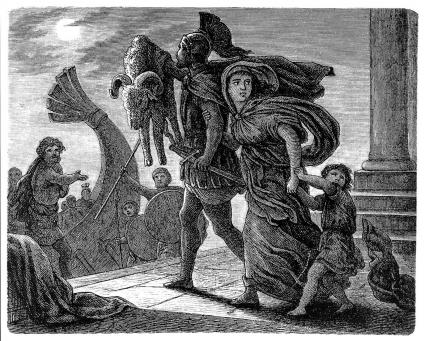 Phrixus and his sister, Helle, both children of King Athamas of Boeotia, were saved by a flying ram. During their escape on the ram, Helle falls off and is killed, but Phrixus makes it safely to the land of Colchis, where he shows gratitude to the hospitable King Aeëtes. Phrixus sacrifices the golden ram to Zeus and gives its fleece to Aeëtes. The Golden Fleece was hidden in a grove of Ares and guarded by a dragon who never slept. The fleece was eventually stolen by Jason, with the aid of Aeëtes daughter, Medea.

Jason, Medea, and the Argonauts

As the tale continues, Jason, son of Aeson, was sent by his uncle, King Pelias, to Colchis to bring the Golden Fleece back to Greece. Jason sets out with his men, the Argonauts, to find it. After many dangers, Jason and the Argonauts arrive at Colchis where the fleece is hidden. However, to capture the fleece he needs the help of Medea, a sorceress-princess who is also the daughter of the king of Colchis. Confronted by the bold, daring and decisive Jason, Medea falls head over heels in love and uses her powers to help him. After Jason captures the fleece, he rewards Medea by making her his lawful wife.

Aries, the warrior, is the Cardinal Fires sign of the zodiac, ruled by Mars. The Myth of Jason and the Golden Fleece reveals that Aries, like Jason, is a bold, adventurous, enterprising, energetic, optimistic, daring, and courageous leader, but also impatient, impetuous, vain, proud, self-centered, and fickle.

Probably the easiest way to locate constellation Aries is with a sky map that's set for your specific sky watching location.

The Stars of the Aries Constellation

Aries has few prominent stars, and you'll be hard-pressed to identify a Ram in the constellation. As a matter of fact, you'll likely see nothing more than a kinked line made up of four moderately bright stars. 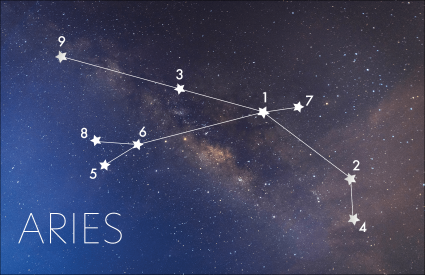 Other stars in the Aries constellation not shown on the map are:

The Aries constellation has a few spiraling, elliptical, and interacting galaxies that are listed in the New General Catalogue of Nebulae and Clusters of Stars (NGC) among them are:

Astrology and astronomy use different systems that divide the sky in different ways. Of the 88 defined constellations, thirteen touch on the Earth's ecliptic. Astronomers call these the constellation zodiac. Twelve of these constellations bear the same names as astrological signs.

Constellations are groups of "Fixed" stars as seen from Earth. Astrologer/astronomer Ptolemy's 1515 Almagest listed 48 constellations. The boundaries as known in the 21st Century were defined by The International Astronomical Union (IAU) in 1930. The Sun passes in front of the constellation Aries from approximately April 18 - May 13.

The signs of the Tropical Zodiac, every 30 degrees of arc along the ecliptic, are defined by the changing of Earth's seasons. The approximate dates the Sun is in the Tropical sign of Aries is from approximately March 21 - April 19.

The Sidereal (star) zodiac begins its yearly cycle when the Sun aligns with the constellation of Aries in the sky. Then, like the tropical zodiac, divides the ecliptic into 12 equal sections of 30 degrees each. The approximate dates the Sun is in the Sidereal sign Aries is April 14 -May 14.

All of Aries Constellation's fixed stars are now in the astrological sign of Taurus. Just three of its stars, Hamal, Sheratan, and Mesarthim, figure prominently in astrology.

Hamal, at 03°11′ Taurus, is the most luminous star in Aries. If prominent in a horoscope, it can indicate a person who is headstrong and often aggressive, yet potentially a capable leader and protector of their community. It can also be indicative of violence. Charles Manson's horoscope shows Hamal conjunct his Taurus Ascendant.

Sheratan, at 03°58′ Taurus, is the second brightest star in Aries. If prominent in a horoscope it can indicate violence, defeat, accidents, injury, danger, and honors. Mohammad Ali's horoscope has Mars in Taurus conjunct both Sheratan and Mesarthim.

Mesarthim, at 03°11′ Taurus, is said to have more of a protective-administrative quality and less of the impulsive aggressiveness of Hamal and Sheratan. Michael Moore's horoscope has both Sheratan and Mesarthim conjunct his Taurus Sun.

The Use of Fixed Stars

When the planets and or other important points aspect a fixed star in a natal chart, that star's influence is thought to be particularly strong. Conjunctions of fixed stars with planets and points in the natal chart are very significant.

The Hebrew astrology-astronomy name of Aries is "Taleh' which generally means "the Lamb of the World." In the Old Testament, almost all verses that mention "lamb" refer to a sacrifice. According to Fixed Star astrologer, Astrology King, "constellation Aries portends events concerning sacred rites and the worship of God. It affects the conditions of the air and the seasons, and presages the results of these elements on things that grow, especially the new shoots or arboreal crops."

1
Comments
© 2006-2021 LoveToKnow, Corp., except where otherwise noted. All Rights Reserved.
Aries Constellation: Myth and Meaning Behind the Ram