Are you interested in learning the love traits of Aquarius? If so, first you should know that Aquarians have obvious eccentricities. Their motto is "live and let live," so they are essentially loners who know a lot of people but have few intimate friends. Some people view Aquarians as eccentric, and their love traits might also seem just as unconventional.

Aquarians of both genders can be fascinating and complicated lovers.

An Aquarian in love is:

One of the most challenging aspects for an Aquarian in love is that they intellectualize emotions and have difficulty balancing the intimacy of love with their need for independence.

The small world of the mundane and traditional has no appeal to a typical Aquarian who's in love. Aquarians may not be into grand shows of affection and they may not say "I love you", but they'll show their love in unique ways that feel right for them and make you feel special. Their innovative and creative ideas about things to do together are but one of the ways they express their love. An Aquarian in love will make time for the person they love, but they'll never know what their Aquarian might come up with. One day, they might suggest meeting friends at a sidewalk cafe, the next it could be volunteering at the local pet rescue center, and the next it might be attending a protest to support a cause that interests them. 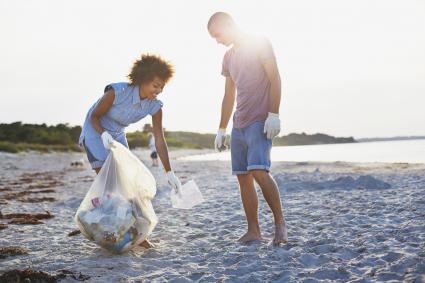 Aquarians are extroverted, friendly, and great listeners and friendship is the key component of a romantic relationship with an Aquarian. An Aquarian in love personifies the statement "friends first, last and always." There's a friendly "you have your life, I have mine, and we have our life together" aspect to the way both genders of Aquarians approach love and this could make their partners a bit crazy.

However, they are very loyal and won't end a relationship over silly problems. Instead, they are rational and objective and take the time to talk out any issues that might arise. If an Aquarian loves you, they will be your best friend and stick with you through thick and thin, even if the romantic relationship ends.

An Aquarian intellectualizes and detaches from their emotions because they can't deal with emotional stress. While this allows them to compartmentalize their feelings, have a more objective view of any situation, and make rational decisions even in a crisis, it can play havoc with their love life. While this is a very important aspect of the Aquarian's nature, it often makes them seem disinterested and distant to their partners.

Add their lack of emotional expression to the fact that they need unlimited independence, and it can seem to the person they love that there is no intimate relationship at all. Although Aquarians have a problem with dealing with their emotions, they are sensitive and they do care. They will listen intently to their partner's problems, are great objective advisers and will do anything for the person they love.

The problem with emotional intimacy is often more pronounced in Aquarian males. It's just more acceptable for a man to intellectualize and detach from their emotions and this was often reinforced in an Aquarian man's boyhood conditioning. However, a detached intellectual nature is more difficult to accept in a woman

Female Aquarians also have difficulty with intimacy, and because this is so different from the stereotypical emotional female they are often negatively characterized as ice queens. However, many Aquarian women receive conditioning while young that softens them and mitigates some of their innate coldness. Although still cool and objective, these women can be aware of, control and express their emotions, and handle interpersonal relationships more empathetically.

When an Aquarian is casually dating someone, having sex is just a fun mind game; a "friends with benefits" affair. However, when they fall in love, it becomes much more. When an Aquarian falls in love, the time they spend in bed with their lover fosters the emotional intimacy that's needed to cement a loving relationship. It's this physically intimate aspect of the relationship that enables an Aquarian to get out of their heads and embrace their emotions.

Don't be fooled by an Aquarian's cool detached behavior, they are looking for love, but not only for love. They are looking for a partner who is a friend and an intellectual equal. One who has a life and interests of their own. They also seek someone who compliments them and won't try to control or change them. Of course, finding someone like that takes time, so Aquarians seldom rush into romantic relationships. However, no two Aquarians are alike and to know a specific Aquarian's love traits requires an examination of their entire horoscope.